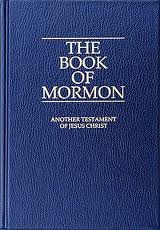 As the official version of the story goes, in 1820, 14-year-old Joseph Smith went into the woods near his home in rural New York to pray. There, God the Father and Jesus Christ appeared to him.

Caught up in the Protestant revivalism of his day, Smith inquired as to which of the Christian denominations he should join. None of them, he was told, because they were all wrong. “The Personage who addressed me said that all their creeds were an abomination in his sight,” Smith later recalled.

Smith was urged to take heart. God would use him to reinstate the true church, which had fallen into complete apostasy after the death of the apostles.

The Church of Jesus Christ of Latter-day Saints professes to be the restored true church. Its leaders claim that Joseph Smith faithfully rediscovered proper church organization – that is, the Aaronic and Melchizedek priesthoods – and the true gospel, which was lost due to “designing priests” that removed its “plain and precious” truths.

In short, the LDS Church declares itself the one true church, while all other forms of Christianity remain apostate.

END_OF_DOCUMENT_TOKEN_TO_BE_REPLACED

When the Rev. Jamie Coots died recently, it made national news.

The co-star of National Geographic Channel’s reality TV show, “Snake Salvation,” was bitten on the hand by a rattlesnake as he led services at the Full Gospel Tabernacle in Jesus’ Name in Middlesboro, Ky. He died less than two hours later after refusing medical treatment.

Coots and his followers represent a sect of Christianity that incorporates snake handling into worship, relying heavily on Mark 16:17-18 for support. The beloved pastor, having survived numerous snakebites in the past, is not the first to die in this manner since George Went Hensley introduced snake handling to Appalachian churches in 1910. Coots died the way he lived, faithful to his beliefs.

Some people classify snake handlers like Coots as cultists, but that is neither fair nor gracious. In defending the Christian faith we need to draw a distinction between cults and sects.

END_OF_DOCUMENT_TOKEN_TO_BE_REPLACED

Lynn Wilder and her husband were quintessential Mormons.

Lynn had served for 8 years as a professor at Brigham Young University, the flagship school of the Church of Jesus Christ of Latter-day Saints.

Their eldest sons had completed two-year missions assignments, and their daughter was demonstrating a strong faith in the LDS Church’s founder, Joseph Smith.

Then, as Lynn explains it, their world came crashing down. In 2006 their third son, Micah, was only three weeks from completing his two-year mission when he called to report that he was being sent home early in disgrace.

His sin: He read the New Testament and confessed to a roomful of missionaries that the Bible offered a different Jesus than the LDS Church — a Jesus of grace, not works. He professed belief in Jesus and confessed he had found a deep and genuine faith.

END_OF_DOCUMENT_TOKEN_TO_BE_REPLACED

Thank you, Missouri Baptists, for enthusiastically supporting the MBC’s new apologetics ministry. Over the last year, I have been privileged to speak or lead workshops in many churches across the state to help Christians “earnestly contend for the faith” (Jude 3).

Topics have ranged from “How do I know the Bible is true?” to “What do false prophets have in common?”

As many of you know, apologetics simply is “a reasonable defense of the Christian faith.” For followers of Jesus there has never been a more important time to know what we believe, why we believe, and how to share our faith with an increasingly skeptical world.

The apostle Peter urges us to “set apart the Messiah as Lord in your hearts, and always be ready to give a defense to anyone who asks you for a reason for the hope that is in you” (1 Peter 3:15).

END_OF_DOCUMENT_TOKEN_TO_BE_REPLACED

The Bible instructs Christians to “always be ready to give a defense to anyone who asks you for a reason for the hope that is in you” (1 Peter 3:15). But with so many competing belief systems out there – from Wahhabism to Rastafarianism – it’s good to know where to go for help.

There are many outstanding books and web resources that may help you earnestly contend for the faith. Here are a few of my favorites.

On Mormonism. Mormonism 101 and Answering Mormons’ Questions, both by Bill McKeever and Eric Johnson, are excellent books that address key issues pertaining to the LDS Church in easy to understand language. McKeever’s website, www.mrm.org (Mormonism Research Ministry), is filled with helpful tools.