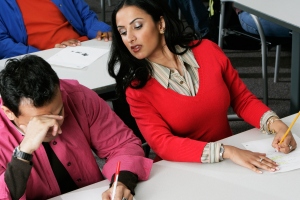 Do you know the difference between Scientology and Christian Science? Buddhism and Baha’ism? Rastafarianism and Ralph Laurenism? (Okay, I made that one up). Here’s a chance to test your knowledge. The correct answers are at the end of the quiz.

1. Which of the following is not a Hindu scripture:

Islam is the second largest religion in the world – and one of the fastest growing.

Buddhism has its roots in Hinduism but differs in many beliefs and practices.

4. The great dividing line between Judaism and Christianity is:

b) Observance of the Sabbath

6. Which of the following religions is best summarized by the statement, “As man is, God once was; as God is, man may become:”

7. A cult is best described as:

a) A young horse

b) A garment for Scottish men

8. Muhammad taught that Jesus was all of the following except:

a) A great prophet

b) Born of a virgin

9. The Jehovah’s Witnesses teach all of the following except:

a) Jesus as a god

b) Soul sleep after death

c) Annihilation for the damned

10. Who is Siddhartha Gautama?

a) Master of the pan flute

b) The explorer who discovered Guatemala

c) The founder of Buddhism

Mary Baker Eddy, L. Ron Hubbard, and Sun Myung Moon joined forces in 1984 to form what they claimed was “perfect Christianity.” They called their new organization the Unification Church of Christian Science.

12. According to Mormon history, which of the following Jewish tribes crossed the Atlantic and became the ancestors of the American Indians:

1. Darth Veda (d). The Vedas are the sacred writings of Hinduism. Darth Vader is the black-cloaked villain of “Star Wars.”

2. True. According to Adherents.com, there are more than 1.5 billion Muslims in the world, compared to 2.1 billion Christians. Islam may overtake Christianity as the most populous religion in the coming decades due to higher birth rates in the Muslim world.

3. True. By some accounts, Buddha essentially distilled Hinduism into a more common-sense approach to the Eastern religion.

4. Jesus as Messiah (c). Many Jews throughout the Christian era have accepted Jesus as a historical figure but reject Him as the Son of God.

5. L. Ron Hubbard (b). A successful science fiction writer in the 1930s and 1940s, Hubbard once remarked that a person could make even more money by inventing a new religion. He was right.

7. Counterfeit Christianity (d). A cult is a religious organization whose members claim to be Christians, and who use the Bible and Christian terms, yet who deny the central beliefs of historic Christianity.

8. Son of God (d). To call Jesus by this name is to commit “shirk,” the unpardonable sin.

9. Jesus’ bodily resurrection (d). Jehovah’s Witnesses view Jesus as an earthly manifestation of Michael the Archangel. They believe Jesus ceased to exist at death and was recreated three days later.

11. False. Eddy founded Christian Science, Hubbard established Scientology, and Moon led the Unification Church. It’s doubtful they ever met, or would have gotten along.

12. The Lamanites (a). If you guessed the Kung Pao Buckeroos, you’re no doubt a fan of country singer (and Baptist) Brad Paisley.

This column first appeared Sept. 24, 2013, in The Pathway, the news journal of the Missouri Baptist Convention.