This column first appeared in The Pathway, the official news journal of the Missouri Baptist Convention. 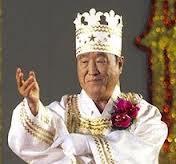 The recent passing of the Rev. Sun Myung Moon ends a colorful chapter in the history of counterfeit Christianity. The founder of the Unification Church and self-proclaimed “Lord of the Second Advent” established a religious empire that enriched Moon and deceived millions.

He married followers in the name of the “True Family,” a sinless line of humanity that would complete the failed mission of Jesus, who died on the cross before He could marry and have children.

While Moon was a quirky leader to say the least, he also was typical of cult founders whose organizations fizzle when they die or are disgraced. The Unification Church today is a shadow if its former self.

True, Mormonism and the Jehovah’s Witnesses thrived after the passing of their founders, but they had strong successors and connected more closely to mainstream Christianity than such aberrant organizations as the Unification Church.

In fact, the most successful forms of counterfeit Christianity are those that come closest to biblical truth. Satan always has been the father of lies and the master of deceit. He takes truth and twists it so that it appeals to our fallen nature while promising to quench our spiritual thirst.

We can learn much from the apostle John, who battled false teachers throughout his ministry and offers three steps to counter them in 1 John 4:1-4.

1.  Do not believe every spirit. The term “spirit” in this context refers to those who claim to have divine gifts for service.  Jesus warns us of miracle-working false messiahs and false prophets (Matt. 24:24), and the apostle Paul says Satan’s followers disguise themselves as ministers of righteousness (2 Cor. 11:14-15).

We should be like the Bereans who greeted Paul and Silas. Acts 17:11 says “they welcomed the message with eagerness and examined the Scriptures daily to see if these things were so.”

So, a healthy skepticism is in order any time we turn on Christian television, listen to an evangelist on the radio, surf the web or browse a Christian bookstore. This is where Satan does his best work because we have believed the lie that to be a person of faith means we should never kick the tires or check under the hood.

2. Test the spirits. The Word of God is the yardstick by which all truth claims must be measured. Most false prophets can be identified by holding them up to the biblical standards of true prophets, who:

3. Know the Spirit of God. In his first epistle, John challenged the views of the “antichrists” about the identity of Jesus. They accepted Jesus’ deity but rejected His humanity. Carried to its logical conclusion, they denied his death on the cross and physical resurrection, without which there is no forgiveness of sins and eternal life.

Believers need to know the real Jesus. Indeed He is the eternal Son of God, Creator and sovereign Lord; virgin-born God-man; sinless Savior who paid our sin debt on the cross and rose physically from the dead; and returning Lord who will appear visibly and physically one day.

John’s words are simple and effective. Christians are people of faith – not a blind, ignorant grope-in-the-dark faith, but a reasonable faith based on the evidence God has given us in creation, scripture, and Christ.

While there will always be false prophets who fleece the flock rather than feed it, we can guard our hearts if we follow John’s simple commands: Don’t believe every spirit (that is every person claiming diving gifting); test the spirits (according to scripture); and know the Spirit of God (the Holy Spirit’s teaching about the real Jesus as revealed in the Bible).