Rev. 15:2 – “I also saw something like a sea of glass mixed with fire, and those who had won the victory over the beast, his image, and the number of his name, were standing on the sea of glass with harps from God.” (HCSB)

A sea of glass mixed with fire

We have encountered a sea of glass before. In Rev. 4:6, John records, “Something like a sea of glass, similar to crystal, was also before the throne.” 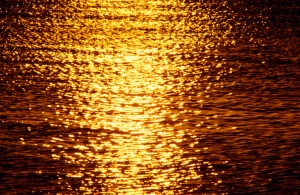 As noted in the commentary on chapter 4, the sea may correspond to the brass vessel before the sanctuary, where the priests wash in preparation for service. The sea of glass also appears in prophetic visions of God’s throne room. For example, in Exodus 24, Moses, Aaron, Nadab, Abihu and 70 of Israel’s elders see “something like a pavement made of sapphire stone, as clear as the sky itself” beneath God’s feet. And Ezekiel sees “[T]he shape of an expanse, with a gleam like awe-inspiring crystal” spread out over the heads of the living creatures (Ezek. 1:22).

The ESV Study Bible notes that the sea of glass “is the ‘floor’ of heaven and the ‘ceiling’ of the created universe, and its transparent tranquility shows heaven’s peace in contrast to earthly turmoil” (Rev. 4:6-8). Jurgen Roloff writes, “This glassy sea is the dome of the firmament, the heavenly ocean, which in ancient thought was considered to be transparent” (p. 182).

Matthew Henry adds this thought: “As in the temple there was a great vessel of brass filled with water, in which the priests were to wash when they went to minister before the Lord (and this was called a sea), so in the gospel church the sea or laver for purification is the blood of the Lord Jesus Christ, who cleanses from all sin, even from sanctuary-sins. In this all those must be washed that are admitted into the gracious presence of God on earth or his glorious presence in heaven” (Rev. 4:1-8).

But there is a significant difference between the sea in Rev. 4:6 and Rev. 15:2: The latter sea is “mixed with fire.” Why?
END_OF_DOCUMENT_TOKEN_TO_BE_REPLACED