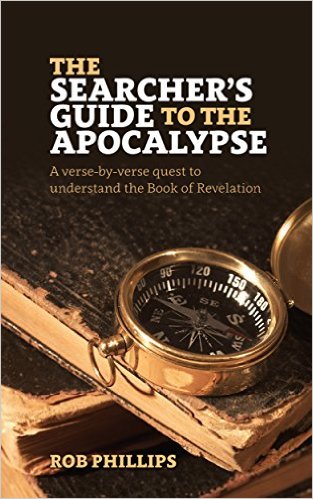 Get the Kindle ebook now

The Searcher’s Guide to the Apocalypse is now available as a Kindle ebook. The book is a verse-by-verse quest to understand the Book of Revelation, the final book in the Bible and the first place many people go to seek answers about the future.

But the Book of Revelation is more than prophecy. It is rich with information about the first-century church. And it is relevant to 21st Century Christians who wait eagerly for the return of Christ.

Revelation promises a blessing to every person who reads, hears, and keeps the words of this prophecy, and The Searcher’s Guide aims to sort through various end-times scenarios, uncovering the rich and unchanging truths of God’s Word.

Here are excerpts from the book’s Foreword:

My reluctant journey into the Book of Revelation began more than five years ago, when my Sunday school class in Brentwood, Tenn., asked me to lead a verse-by-verse study of the Apocalypse of John.

I resisted for two reasons. First, we had just spent more than a year on a verse-by-verse study of Isaiah, and I was weary. Second, the Book of Revelation has been written about and studied so extensively, and debated so vigorously, that I didn’t think I had much to contribute. Discussions of the end times often generate more heat than light, and I didn’t want to engage in battles each week over the meaning of apocalyptic imagery, symbolic numbers, and complex end-times scenarios.

Finally, I agreed to lead the study if we would approach Revelation with a first-century mindset. In other words, what did John’s immediate audience understand the Apocalypse to mean? Equally important, we agreed to seek and embrace the clear teachings of Revelation, highlighting the passages that build upon the core doctrines of the faith: the deity of Christ, salvation by grace alone through faith alone; the imminent return of Jesus; future resurrection and judgment; and the promise of new heavens and a new earth.

We had barely begun the study when I moved to another city, but I promised to complete the task and post notes regularly on my blog, OnceDelivered.net. This manuscript is the fulfillment of that promise.

My approach to Revelation is fairly straightforward: A verse-by-verse study seeking to understand how first-century readers understood John’s apocalyptic messages; an effort to glean clear truths consistent with the rest of scripture; and a quest to see how proponents of four leading views understand Revelation: the preterist, historicist, futurist, and spiritualist views.

This approach, while satisfying to me, frustrated others who sometimes demanded to know the “correct” interpretation of John’s letter. One indignant reader of my blog implored me to stop sharing scholars’ opinions about a particular passage and state plainly the “real” meaning.

My response to challenges like that is to admit I don’t know which of the four major views of Revelation is correct — if any of them. Each view has its merits. I think the preterist and futurist views have the most to offer, but even more helpful are the undeniable truths that seep through the visionary language, like sunlight through stained glass: God is sovereign over human history; He sent His Son to redeem lost people; Jesus is seated at the right hand of the Father, poised to leave heaven a second time and fetch His Bride; faithful believers suffer in this life but are assured of future glorification; those who oppose Christ and abuse His Bride will be punished; and one day Christ will regenerate the created order, restoring the heavens and earth to sinless perfection.

While I have more questions about Revelation today than I had five years ago, I also have a few more answers. Further, I am less inclined to doggedly defend my particular point of view about a passage, symbol, or number, while seeking to understand another person’s perspective. Finally, where I lack understanding, I find myself more satisfied to rest in the sovereignty of God. Perhaps that is the “blessing” promised to those who read and hear the words of this prophecy (Rev. 1:3).

A caution to the reader: This manuscript is a work in progress. It is as flawed as its author, too lengthy, and a bit rough in places. It also relies too heavily on quotes from commentators. At the start of this journey, I hoped to arrive at a settled conviction about the “correct,” or at least the “best,” interpretation of Revelation. Happily, I exchanged that quixotic quest for a lantern and shovel, mining the precious truths of what John received on Patmos.

Regardless of your view of the end times, your opinion of me, or your level of understanding of the Apocalypse of John, please join me in echoing the apostle’s prayer, “Amen! Come, Lord Jesus!” (Rev. 22:20).