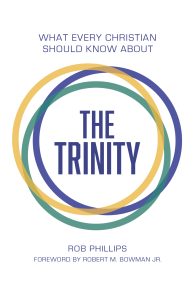 This is the second in a series of columns on the Trinity.

How do we biblically define a term that never appears in the Bible? As Jehovah’s Witnesses, Muslims, and others are quick to point out, the word Trinity is conspicuously absent from the pages of Scripture. Therefore, they argue, to embrace such a term goes against the Bible’s clear teaching.

Not so fast. While it’s true the term Trinity is not found in English Bible translations, that doesn’t mean the doctrine is missing in action. We might point out that phrases such as “the second coming” and “receiving Jesus as Savior” never grace the Bible’s pages either. Even so, Christians look forward to the return of Jesus one day, and we enjoy benefits as adopted children of God, having received Him by faith (John 1:12).

So, when we talk about the Trinity, it’s important to show how Scripture describes God as one eternal being in three persons. This is not as easy as it sounds, for the Trinity in some respects is a mystery – a revelation of God hidden in times past but revealed progressively from Genesis to Revelation.
END_OF_DOCUMENT_TOKEN_TO_BE_REPLACED