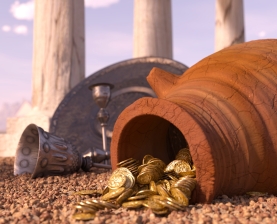 The angel spells out the reasons for the fall of Babylon the Great in verse 3: “For all the nations have drunk the wine of her sexual immorality, which brings wrath. The kings of the earth have committed sexual immorality with her, and the merchants of the earth have grown wealthy from her excessive luxury.” The wickedness of the world system opposed to God has been exposed. Not only has Babylon the Great abandoned the one true and living God, but she has replaced Him with multiple false deities that lure the world’s inhabitants through the lust of the flesh, the lust of the eyes, and the sinful pride of one’s lifestyle (1 John 2:16).

How applicable is this indictment of Babylon on today’s society, which embraces “spiritualism” at the expense of true worship. As the apostle Paul warns, “But know this: Difficult times will come in the last days. For people will be lovers of self, lovers of money, boastful, proud, blasphemers, disobedient to parents, ungrateful, unholy, unloving, irreconcilable, slanderers, without self-control, brutal, without love for what is good, traitors, reckless, conceited, lovers of pleasure rather than lovers of God, holding to a form of godliness but denying its power. Avoid these people” (2 Tim. 3:1-5).

When we boast that we are spiritual but not religious; when we lament the addition of a fish to the endangered species list but celebrate the right to end the life of an unborn child for any reason; when we abrogate the responsibility of individuals and families to work hard and care for their own by increasing our dependency on government entitlements; when we insist that ethics are situational and reject absolute truth as a vestige of less-enlightened times; when we say all forms of religious expression are fine as long as the name of Jesus is excluded; when a 50th wedding anniversary between a man and a woman is rare but gay marriage is normative; and when a theory of origins based on time and chance is called an indisputable fact but a theory that points to intelligent design is considered rank scientific heresy – we have become the people who drink the wine of Babylon the Great’s sexual – that is, spiritual – immorality. And we have invited the wrath of God.
END_OF_DOCUMENT_TOKEN_TO_BE_REPLACED