This is the last in a four-part series on Roman Catholicism. 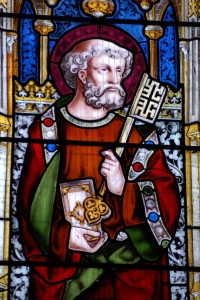 After Simon Peter makes his famous declaration that Jesus is “the Messiah, the Son of the living God,” Jesus tells the apostle, “you are Peter, and on this rock I will build My church, and the forces of Hades will not overpower it” (Matt. 16:16, 18).

“The Lord made Simon alone, whom he named Peter, the ‘rock’ of His Church. He gave him the keys of his Church and instituted him the shepherd of the whole flock…. This pastoral office of Peter and the other apostles belongs to the Church’s very foundation and is continued by the bishops under the primacy of the Pope….

“For the Roman Pontiff, by reason of his office as Vicar of Christ, and as pastor of the entire Church has full, supreme, and universal power over the whole Church, a power which he can always exercise unhindered.”

Of course, not everyone agrees.

As Michael F. Ross writes in Christian Research Journal, “Peter became ‘the rock’ not as an individual with an office, but as the leader of the apostolic band of men who received and recorded New Testament revelation.”

Ross continues: “That he is the first among equals seems indisputable; that his is an office transferred to others is indefensible. In fact, in Matthew 18:1-6, the apostles argue over preeminence, something moot had Peter been made the first ‘Pope’ by Jesus. The New Testament knows no Head but Jesus Christ.”

We should acknowledge that Jesus, in referring to “Peter” (petros) and to “this rock” (petra), likely is speaking of the apostle in both instances, as the Catholic Church argues. However, we may appreciate Jesus’ play on words as He foretells the impact of Peter’s life and confession on the kingdom of God. We should not take the Lord’s words beyond their intended meaning and exalt a mere man to the position of head of the church.

(1) The New Testament nowhere mentions a line of apostolic succession.

(2) Peter never claims to be head of the church, or even the chief among apostles. He even receives a public rebuke from the apostle Paul in Antioch (Gal. 2:11-14).

(3) When Jesus gives Peter and the apostles the keys of the kingdom of heaven, He is talking symbolically about their authoritative preaching of the gospel, not of any power to forgive sins or condemn to hell. Peter is clear that only Jesus has authority to grant forgiveness based on His finished work on the cross (1 Peter 2:24-25).

(4) “Binding and loosing” are rabbinical terms for approval or disapproval concerning the Law and the regulations of conduct, not the vested power to forgive sins.

(6) Peter shares his authority with the other apostles (John 20:23) and with the church in general (Matt. 18:18). The church, too, can bind or loose conduct and confession as it shares the gospel and engages in church discipline.

Christ is the Head of the church, and the apostles and prophets are its foundation. We are to build upon that foundation, not move it perpetually into the rafters.