This is the third in a four-part series on Roman Catholicism. 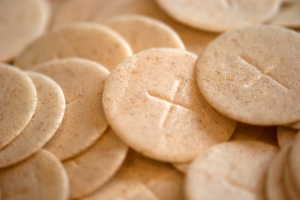 Roman Catholics embrace at least seven doctrines that evangelical Christians reject as inconsistent with the Word of God. In the previous article, we explored five of these doctrines. This column examines two more.

The Bible reveals that salvation is a gift of God received by faith in Jesus Christ. The Christian partakes of baptism and the Lord’s Supper as acts of obedience, or ordinances, which have no saving value.

Roman Catholics, however, teach seven sacraments that are essential to an individual’s eternal destiny. Sacraments in Catholic theology do not merely symbolize grace; they are said to be containers of grace, which participants receive as they partake.

The Catechism of the Catholic Church states plainly: “The Church affirms that for believers the sacraments of the New Covenant are necessary for salvation.”

A brief summary of the sacraments

Baptism. This is said to confer initial justification and the new birth upon participants, purifying them from sin, making them new creatures, and placing sanctifying grace in their souls.

Penance. Catholics who commit mortal sins following baptism must participate in penance to avoid hell at death. Sinners must confess their sins to the priest, be sorry for the sins, and then carry out acts of penance as prescribed by the priest to ensure that saving grace is restored.

The Eucharist (Mass). This is the most important Catholic sacrament because it involves the re-presenting or renewing of the sacrifice of Jesus. During Mass, the bread and wine actually become the body and blood of Jesus (transubstantiation), whose continual sacrifice is said to appease God’s wrath and cover people’s sins.

Catholics claim that the Mass does not diminish the work of Christ on the cross but rather is the primary means of applying the benefits of His death to the faithful.

Confirmation. This is the second of three Sacraments of Initiation (the first being baptism and the third being communion). It is regarded as the perfection of baptism because, as the Introduction to the Rite of Confirmation states, “by the Sacrament of Confirmation, [the baptized] are more perfectly bound to the Church and are enriched with a special strength of the Holy Spirit.”  The bishop administers confirmation by laying hands on the head of the parishioner, resulting in the receiving of the Holy Spirit.

Matrimony. Through marriage, two people of different sexes receive grace to fulfill their special duties. There is a triple good attached to this sacrament; first, the begetting of children and their education to worship God; second, the faithfulness each party owes to the other; and third, the permanence of marriage, which represents the unbreakable union between Christ and His Church.

Holy orders. This involves ordination to the offices of bishop, priest, or deacon, conferring on a man the spiritual power and grace to sanctify others.

Anointing the sick. This sacrament is intended for those who are sick or near the point of death. It is said to remove the infirmity left by sin and is carried out for the purpose of commending to the Lord “the faithful” who are “dangerously sick” so He can relieve them and save them.

As important as the sacraments are to Roman Catholics, it should be noted that the sevenfold sacramental system was not initiated until the 12th century and was not a permanent part of Catholicism until the Council of Florence in A.D. 1439.

The Bible teaches that Christ paid our sin debt on the cross. Believing sinners are declared in right standing before God (justified) and granted everlasting life. Our sins after justification affect our fellowship with Christ and should be confessed, but justification is never revoked. Evangelicals believe that immediately upon death, the souls / spirits of Christians enter directly into the presence of God in heaven, where they await resurrection, final judgment, and glorification.

Catholic theology, in contrast, teaches that not all Christians enter heaven immediately upon death. The doctrine of purgatory became official Catholic dogma in A.D. 1438. Purgatory is a temporary place of suffering where the dead who are bound for heaven are purified from unpaid sins. The Catechism of the Catholic Church states that “all who die in God’s grace and friendship, but still imperfectly purified, are indeed assured of their eternal salvation; but after death they undergo purification, so as to achieve the holiness necessary to enter the joy of heaven.”

Catholics are taught they may earn “indulgences” for themselves or departed loved ones to shorten the time spent in purgatory. By doing the sign of the cross, reciting the rosary in a family group, visiting a Catholic shrine, or performing other duties, a person may draw from the “treasury of the Church” – an inexhaustible fount of merit provided by Jesus, Mary, and the saints.

Next: Was Peter the first pope?