Previously: Assemble them for battle – Revelation 16:14-16

Rev. 16:17 –Then the seventh [angel] poured out his bowl into the air, and a loud voice came out of the sanctuary from the throne, saying, “It is done!” 18 There were flashes of lightning and rumblings of thunder. And a severe earthquake occurred like no other since man has been on the earth – so great was the quake. 19 The great city split into three parts, and the cities of the nations fell. Babylon the Great was remembered in God’s presence; He gave her the cup filled with the wine of His fierce anger. (HCSB) 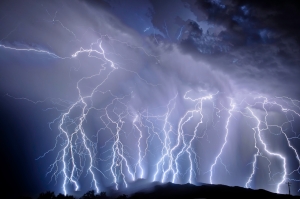 When the seventh angel pours out his bowl into the air, a loud voice from the sanctuary declares, “It is done!” The 24 elders make a similar pronouncement in Rev. 11:15-19. They announce that “the time has come for the dead to be judged and to give the reward to Your servants the prophets, to the saints, and to those who fear Your name, both small and great, and the time has come to destroy those who destroy the earth” (v. 18).

More importantly, this cry echoes the declaration of a triumphant Jesus on the cross. Just before His death He shouts, “It is finished!” At Calvary, the Son of Man completes the work of redemption, bearing our sin and receiving the wrath of God on our behalf. Like a Roman commander overlooking the battlefield, He shouts, “It is finished!” because He has vanquished the evil one and released those bound to him in captivity. And like the high priest on the Day of Atonement, He shouts, “It is finished!” because no more sacrifices will be accepted. Both the Roman soldiers and the Jews around the cross have a clear context for understanding the significance of the Lord’s declaration. Jesus has fulfilled the law through His sinless life; fulfilled the types and shadows of the Old Covenant; fulfilled the prophecies of Messiah’s suffering; and completed the task for which the Father sent Him and the Spirit empowered Him. The work of redemption – it is finished!