This is the second in a series of columns about same-sex attraction, adapted from the new resource, “What Every Christian Should Know About Same-Sex Attraction,” available in print and Kindle editions. 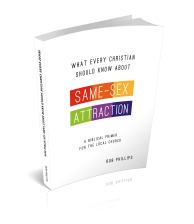 1. The Bible condemns all forms of sexual behavior outside the bonds of heterosexual, monogamous, life-long marriage.

Homosexuality is not a special class of sin that makes it any more or less an act of rebellion against God than premarital sex, adultery, polygamy, pornography, or other sexual sins.

We do injustice to God’s Word, and to those struggling with same-sex attraction, when we make homosexual conduct a special class of sin.

The Bible never speaks of homosexuality in a positive – or even a neutral – light. Sexual relations between members of the same gender always in Scripture are depicted as sinful.

Those who commit same-sex acts, refuse to acknowledge them as sinful, and reject the call to repentance are outside the kingdom of God.

God created male and female, and He designed a unique, complementary sexual union between us in the bonds of heterosexual, monogamous life-long marriage.

Summarizing the 2,000-year-old Christian narrative on sexuality and marriage, Pascal-Emmanuel Gobry writes, “The sexual act is meant to reflect God’s love by fostering a union at once bodily and spiritual – and creates new life. … The fruitfulness of the marriage act reflects that God is a creator and has charged man to be an agent of his ongoing work of creation.”

In Matthew 19 the Pharisees ask Jesus, “Is it lawful for a man to divorce his wife on any grounds?” Rather than debate the lawfulness of failed marriages, Jesus takes the religious leaders back to the Garden of Eden.

“Haven’t you read,” He replies, “that He who created them in the beginning made them male and female … For this reason a man will leave his father and mother and be joined to his wife, and the two will become one flesh? So they are no longer two, but one flesh. Therefore, what God has joined together, man must not separate.”

The Pharisees respond, “Why then did Moses command us to give divorce papers and send her away?” Jesus tells them, “Moses permitted [not commanded] you to divorce your wives because of the hardness of your hearts. But it was not like that from the beginning.”

Clearly, the Lord has not changed His reasons for creating men and women, nor has His “divine accommodation” (allowing divorce under terms of the Mosaic Law) lowered His standards for sexual purity and marriage.

5. Christians share with our LGBT friends a struggle against sinful desires.

Everyone is born with a natural tendency to live independently of God. When we act upon fleshly desires, we violate God’s holy standards and are in need of His saving grace.

Even so, Christians struggle with sins like lust, anger, lying, selfishness, arrogance, and other ways humanity rebels against our Creator. Remembering our sinful tendencies helps us see the sins of other people in a more accurate, and gracious, light.

Paul makes this clear in 1 Cor. 6:9-11. He begins with a negative: “Do you not know that the unjust will not inherit God’s kingdom? Do not be deceived: no sexually immoral people, idolaters, adulterers, male prostitutes, homosexuals, thieves, greedy people, drunkards, revilers, or swindlers will inherit God’s kingdom.”

Then, he reminds his fellow believers, “Some of you were like this; but you were washed, you were sanctified, you were justified in the name of the Lord Jesus Christ and by the Spirit of our God.”

The evidence to date indicates that same-sex attraction typically is discovered early in life and involves a combination of biological, psychological, and environmental factors.

Individuals with same-sex attraction likely will struggle with it their entire lives. The difference is that the One who is in us is greater than the one who is in the world. God gives us the ability to overcome even the strongest sinful urges.

7. We should welcome into our churches those struggling with same-sex attraction.

This does not mean those living unrepentant, openly gay lifestyles should be received as members, or should play any role in the leadership of the church. But the church should be a safe place for anyone struggling with same-sex attraction to have a candid, caring conversation.

We should not deny church membership to those who confess same-sex attraction, and agree that same-sex lust and conduct are sinful, and who seek to overcome these sinful desires and behaviors by the power of God and the accountability of a community of fellow believers.

Would we not afford the same consideration to those who struggle with heterosexual lust, gossip, pride, or gluttony?

Next: God’s creative intent for sex and marriage.