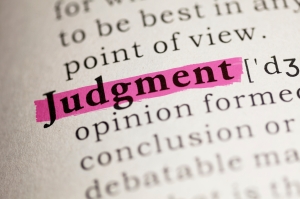 Rev. 17:1 –Then one of the seven angels who had the seven bowls came and spoke with me: “Come, I will show you the judgment of the notorious prostitute who sits on many waters. 2 The kings of the earth committed sexual immorality with her, and those who live on the earth became drunk on the wine of her sexual immorality.” 3 So he carried me away in the Spirit to a desert. I saw a woman sitting on a scarlet beast that was covered with blasphemous names and had seven heads and 10 horns. 4 The woman was dressed in purple and scarlet, adorned with gold, precious stones, and pearls. She had a gold cup in her hand filled with everything vile and with the impurities of her prostitution. 5 On her forehead a cryptic name was written: BABYLON THE GREAT, THE MOTHER OF PROSTITUTES AND OF THE VILE THINGS OF THE EARTH. 6 Then I saw that the woman was drunk on the blood of the saints and on the blood of the witnesses to Jesus. When I saw her, I was greatly astonished. (HCSB)

A tale of two cities

Revelation contrasts two women who also are depicted as cities. First, there is the faithful bride of Christ represented as the New Jerusalem. Second, there is the great prostitute, who is denoted as Babylon. John draws from the Old Testament to help us identify these women. In the Old Testament, Israel appears either as a pure bride (Isa. 54:5-6; 62:5; Hosea 2:19-10) or as a prostitute or adulteress (Jer. 3:6-10; Ezek. 16:15-22; 23:1-49; Hosea 4:12-13; 5:3), depending on her relationship with God at the time the prophets spoke.

This imagery is carried forward into the book of Revelation. It’s important to note that sometimes the harlot is not Israel but evil foreign lands such as Nineveh (Nahum 3:4) or Tyre (Isa. 23:17).

John’s focus in Revelation 17-18 is on God’s judgment of the prostitute. She has aligned herself with the beast from the sea and demonic spirits. Her own idolatry and immorality have corrupted the nations around her. Her wealth and power accelerate her corrupting influence.

Perhaps most significantly, the prostitute faces the wrath of God because she has persecuted the followers of Christ. John sees the prostitute as drunk with the blood of the saints (Rev. 17:6). He adds that in the great city is found the blood of the prophets and saints and of all who have been killed on the earth (18:24). Her judgment is severe because her sins are piled up to heaven and God remembers her crimes.

But who is this woman? Historically, the great prostitute has been identified as Rome, the center of political, economic, religious and military power of the world in John’s day. Others expand this to mean the Roman Catholic Church, which over the centuries accumulated great wealth and often persecuted those who did not bend the knee to the pope.

For first-century readers of Revelation, Rome is a logical choice. But so is Jerusalem. If Revelation is written prior to 70 A.D., John may be witnessing the destruction of his beloved nation just as Jesus prophesies in Matthew 24. This helps explain his astonishment in verse 6.

But keep in mind that the events of this chapter could have both historical and future implications. While readers in John’s day understand this vision as applying to Rome, or perhaps Jerusalem, subsequent readers like us see this as foreshadowing what occurs in the last days. Just as Jesus draws from the abomination of desolation in Daniel to warn of the destruction of Jerusalem after His ascension, we might infer from the notorious prostitute and scarlet beast that political and religious affiliations in the last days will result in persecution of the saints, keeping in mind that God will judge the wicked perhaps through their own in-fighting.

Revelation 17 is laid out in two prophetic sections. Verses 1-6 reveal the notorious prostitute riding on the scarlet beast. Verses 7-18 provide the meaning behind the vision. Let’s look first at what John sees (vv. 1-6) and then focus on the angel’s explanation (vv. 7-18).

The woman and the scarlet beast

One of the seven angels who pour out the bowls of wrath becomes John’s guide. The fact that it is one of the angels associated with the bowl judgments may indicate that chapters 17 and 18 are a part of these judgments. “Come,” says the angel, “I will show you the judgment of the notorious prostitute who sits on many waters. The kings of the earth committed sexual immorality with her, and those who live on the earth became drunk on the wine of her sexual immorality” (vv. 1-2).

The angel then carries John away “in the Spirit” to a desert. We have seen this phrase before. In Rev. 1:10 John records that he is “in the Spirit on the Lord’s day” as he begins receiving the revelation. This phrase literally is, “I became in the Spirit” or “I became in spirit.” It means John is brought by God’s spirit into a realm of spiritual vision. In the same way, the angel in Revelation 17, in obedience to the Lord, leads John into a spiritual setting so that he can see what God wants to reveal to him about the notorious prostitute and the beast.

The word “desert” is rendered “wilderness” in Rev. 12:6, 14, where it describes a place of protection for believing Israel. Here, however, it depicts a place where John sees the harlot and the scarlet beast. W.A. Criswell comments: “When the Lord showed the Apostle John the bride of Christ, the New Jerusalem, the city and the people of the Lord, He took him to a mountain, great and high. But when the Lord shows to John the course and development of religion in this world, He carries him into the wilderness. Wherever there is spiritual harlotry, there is desolation and a desert of dreary, weary waste” (Expository Sermons on Revelation, Vol. 4, p. 181).

Here’s what John sees: A woman sitting on a scarlet beast. Blasphemous names cover the beast, who has seven heads and 10 horns. The woman is dressed in purple and scarlet. She is adorned with gold, precious stones and pearls. In her hand she holds a golden cup filled with everything vile and with the impurities of her prostitution. A cryptic name is written on her forehead:

THE MOTHER OF PROSTITUTES

AND OF THE VILE THINGS

The woman is drunk on the blood of the saints and the witnesses to Jesus. This vision astonishes John. Literally, the text reads, “And I was astonished with great astonishment.”

What is it about this vision that stuns the apostle in a way that the previous 16 chapters have not? Paige Patterson offers this observation: “Perhaps a safe venture would be to suggest that John sees something unexpected about the character of this scarlet woman. Most of the previous visions have been known to John in some form from his reading of the Old Testament. As a prisoner of Rome on the Isle of Patmos, he would find little amazement in discovering that the rulers of the world and the world system would be in a contrarian posture to the work of God. So perhaps what takes the apostle’s breath away at this point is his recognition that this is a religious system purporting to be something it is not. Hence the world ‘unfaithfulness’ or ‘prostitution’ is used with regard to the scarlet woman. This strong imagery converging the ideas of deceit and wickedness may suggest a religious system purporting to represent the true God while actually doing the work of Satan” (The New American Commentary: Revelation, p. 321).

Next: The meaning of the woman and the beast – Revelation 17:7-8