Previously: There stood the Lamb – Revelation 14:1

Rev. 14:1 – Then I looked, and there on Mount Zion stood the Lamb, and with Him were 144,000 who had His name and His Father’s name written on their foreheads.

John sees with the Lamb “144,000 who had His name and His Father’s name written on their foreheads” (v.  1). Who are the 144,000? Are they the same people we encounter in Revelation 7? And should the number be taken literally or symbolically? 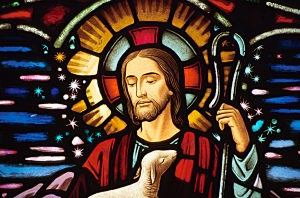 We first hear of 144,000 in Rev. 7:4. They are identified as “slaves of our God” who are sealed “on their foreheads.” This is similar to the 144,000 in Rev. 14:1 who have the Lamb’s name “and His Father’s name written on their foreheads.” This special group is sealed on earth in Revelation 7, and is referred to as “the 144,000 who had been redeemed from the earth” in Revelation 14. However, the sealed slaves in Revelation 7 are from “every tribe of the Israelites,” while those sealed in Revelation 14 are not identified as ethnic Jews. So, are these the same people?

It would appear so, even though there is no clear consensus among scholars. Some insist they are the same 144,000 since they are sealed by God on their foreheads and are redeemed from the earth. Those who hold this view stress that we see the 144,000 on earth in chapter 7 and in heaven in chapter 14. Other interpreters, however, say that these are two different groups: Jews in chapter 7 and the “redeemed from the human race” in chapter 14 (v. 4), suggesting that Gentiles are included in this number.

One possible explanation is that the 144,000 symbolically represent “true Israel,” or believers of the Old Testament and New Testament eras. Just as Paul declares that “not all who are descended from Israel are Israel” (Rom. 9:6), the “true Israel” consists of Jews and Gentiles who have trusted in Christ; therefore the 144,000 symbolize the true church. Put another way, the 144,000 may be seen as 12x12x1000, which stresses the completeness of the number.

As for the sealing on their foreheads, it’s interesting to note that one of the two t’fillin – or phylacteries – that observant Jewish men wear to weekday morning prayers contains the Father’s name, YHWH. Here, the sealed servants gladly bear the name of God’s Son, the Lamb, as well. Some commentators remark that the “seal” is symbolic of the imprinting of property, a sign of protection and responsibility; it is customary in ancient times to brand animals and slaves, which establishes the ownership relationship.

In Ezek. 9:4-6, Ezekiel sees in a vision how God commissions an angel to imprint a mark on the foreheads of those who sigh and groan over the abominations in Jerusalem; they are to be spared the coming judgment. The mark that is meant here, according to commentators, is the last letter of the Hebrew alphabet, the taw, which is written as a horizontal or a vertical cross (x or +) and is the letter with which the name “Christ” begins. John may be drawing a contemporary or end-times parallel to this, demonstrating that no matter how persecuted or forsaken by men, believers belong to Christ and will be spared the judgment that falls upon the wicked.

Still other commentators say the mark is a reference to Christian baptism. Believers from the first century onward have been baptized in the name of the Father, Son and Holy Spirit – “in the name of” being a reference to subordination. We see it in the Great Commission (Matt. 28:19-20) and elsewhere in the New Testament (Acts 8:16; 1 Cor. 1:13, 15). Candidates for baptism in the early church receive anointing in the form of a cross on their foreheads and breasts. In addition, Paul uses the term “seal” (sphragis) for Spirit baptism in 2 Cor. 1:22, and in Eph. 1:13 and 4:30. Whatever John’s use of the word “seal” means, it no doubt ties believers to their sovereign Lord, who has bought them with a price, owns them, keeps them, and values them greatly.

Returning to the identity of the 144,000, it must be acknowledged that there are difficulties in identifying the 144,000 as future ethnic Jews whom God will seal. To begin, 10 of the 12 tribes of Israel lost their national identity almost 3,000 years ago in the Assyrian exile. The other two tribes, Judah and Benjamin, were largely decimated by the Roman armies. Furthermore, as Hank Hanegraaff, points out, “God’s priority is not race but relationship. Christians are portrayed in Scripture as true Israel as a result of their relationship to Jesus, who is described as the Lion of the tribe of Judah” (The Apocalypse Code, p. 126). This is not to say that God is unable or unwilling to regather ethnic Israel; it simply argues that God’s purpose through the Jewish people is fulfilled in Christ and that all who are “in Christ” are Abraham’s seed (see Gal. 3:6-9, 27-29).

The pattern of scripture is to refer to the community of faith, whether Jewish or Gentile in nature, with Jewish designations. New Jerusalem, for example, is figuratively built on the foundation of the 12 apostles and is entered through the 12 gates inscribed with the names of the 12 tribes of Israel. Its walls are 144 (12×12) cubits thick (Rev. 21:12-17). “It is far more likely that 144,000 is a number that represents the twelve apostles of the Lamb multiplied by the twelve tribes of Israel, times one thousand,” writes Hanegraaff. “The figurative use of the number twelve and its multiples is well established in biblical history” (p. 126).

While orthodox Christians may disagree about some details concerning the 144,000, they are in full agreement that these sealed slaves are believers redeemed from the earth, serving the One who lives “in a high and holy place, and with the oppressed and lowly of spirit” (Isa. 57:15).

Next: I heard a sound from heaven – Revelation 14:2